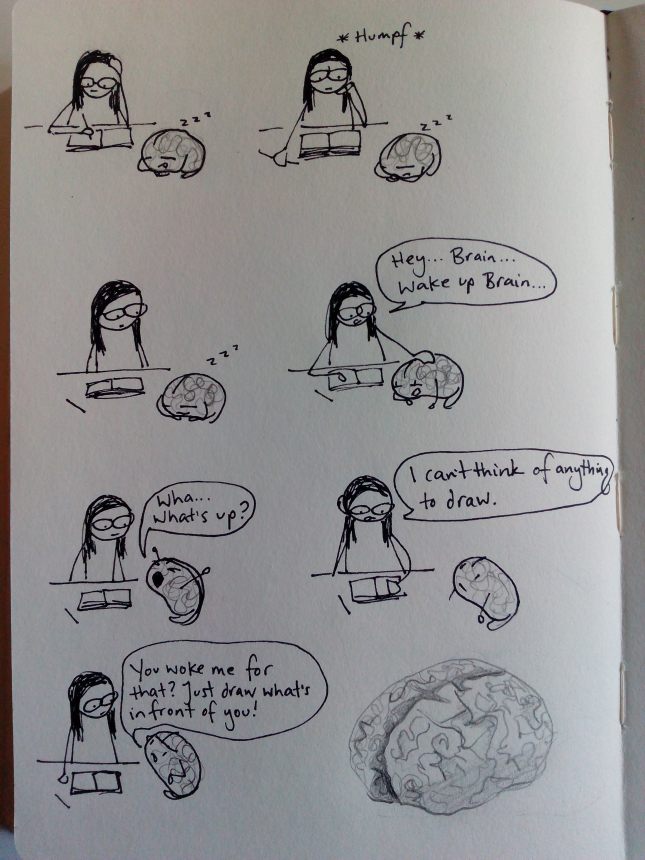 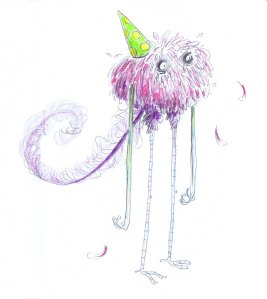 Everyone loves a good monster – especially as we enter autumn with the nights drawing ever closer in.  Soon we’ll be spending the last day of October trying to scare the pants off each other as monsters (and other creepy beasties).

One thing I love about monsters nowadays is that they’re so varied.  There are monsters of every size and description, from Frankenstein to the cast of Monsters Inc.  They’re big and scary or small and friendly and every iteration between.  Thanks to this quality, monsters are fantastically easy to draw.  Whatever you come up with, that’s a monster.  In my mind, there’s no such monster drawing as: ‘but that doesn’t look like a monster’.

Monsters are just so much fun too – which is why I’m running a Monster Party workshop as part of The Art Troupe.  As adults, we don’t get to spend much time playing and doodling for our own enjoyment.  I’m aiming to inject fun and spontaneity into monster drawing with a series of collaborative and solo drawing activities, where at the end of it all, you get your own monster book.  The activities are like ‘artistic sprints’ so as to get around any niggling thoughts of ‘Ok, this monster needs to be good, what shall I draw?  Do I give it three legs or four?  Should I start at the tail or the teeth?’ and you enter into it with more of a ‘Yaaaay!  Monsters!’ instead.

Hooray!  I had an opportunity to go out into the world and draw real life burlesque models last week at Dr Sketchy’s.  Behold – my favourite scribblings from each model: 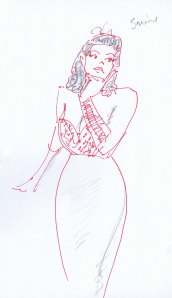 The Drag Queen – Dis Charge.  (It made my day when Dis Charge performed an Amanda Palmer song) 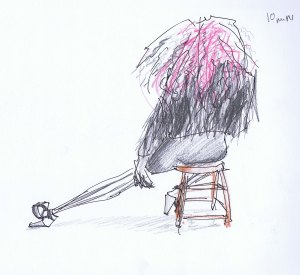 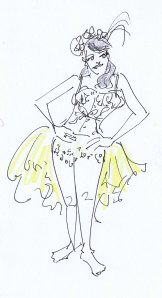 As a warm up for my drawing, I like to do a lot of figure sketches.  As I have a fondness for burlesque, a lot of my sketches revolve around that theme.  Behold, a feathered lady and an aerial hoop artist. 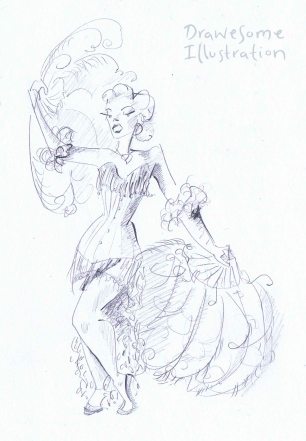 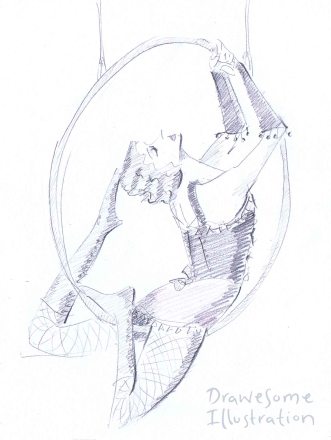 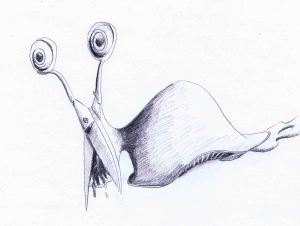 I’ve devised a warm up activity that is a great way of creating monsters and robots – I’ve also decided I should start posting them so you can see!  Please meet my monster called ‘Slugors’, he hides in your garden waiting for the prime opportunity to climb up your trouser leg. He likes to eat the contents of your pocket, from pocket fluff to coins.

It lay forlornly faced down, amid an assortment of drawing tools.  I picked up my Etch-a-Sketch, devoid of life; staring blankly back at me.

“Hello old friend, it’s been a while.”

I remembered the good times we’d had; time I happily spent ‘in the zone’ whiling away the hours.  Having neglected my Etch-a-Sketch for too long, I decided to take it on a date to the museum. 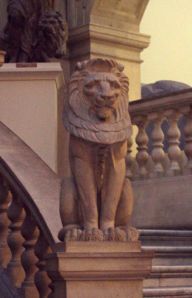 We rocked up at the Bristol museum, a little flustered from the rain.  As I warmed myself with a cuppa at the cafe, I carefully pulled out ‘Etchy’.  It’s grey face a blank canvas, white knobs glistening in the light – we were ready.  The bottom of the grand staircases are decorated with (to my mind) slightly worried-looking lions.   Sat in direct view of worried-lion, I began my continuous single line, weaving its way around the screen.  My fingers attempted a careful co-ordination of ‘up’ and ‘across’ to get those elusive curves.  Some attempts were less successful than others, granted… But at times slip ups were useful for creating impromptu ‘shading’.  As my line completed its final stroke across Etchy’s screen, I couldn’t help but be pleased at my efforts after such a long separation. 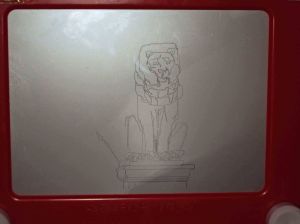 I wandered upstairs to the taxidermy section where wild beasts of all kinds stood their morbid watch.  I settled down for some Etch-a-sketch time with a pig but that didn’t end so well.  Frustrated, I shook my wiggly pig picture and started afresh with the creature next to it – a Himalayan Tahr.  I took my time, starting with the nose, working my way up and around its horns.  My favourite bit was the shaggy fur, as its more difficult to screw it up when you’re trying to be messy. 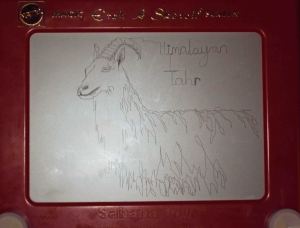 Eventually my Himalayan Tahr materialised onto the screen.  And just in case I forgot what it was, I wrote the name in the top right corner.  Unfortunately, in order to connect the letters you have to use a cursive writing, despite plain ol’ capital letters being the easiest  to create with the Etch-a-Sketch’s straight lines.

I was definitely getting in the swing of Etch-a-Sketching but sadly that was all I had time for.  We make a good team, Etchy and I, so I think we’ll be having another date.

You’re faced with one of those first world dramas – you’ve got to get a gift that means you care; that is in equal parts practical and individual.  That is special but doesn’t cost the earth…

So I came up with an illustrated tissue box.  Obviously.

As I think about it now, perhaps tissues do cost the earth in a natural resources kind of way – but I’ll not lose sleep about it.  Behold my genuis in action below: 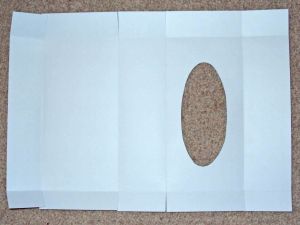 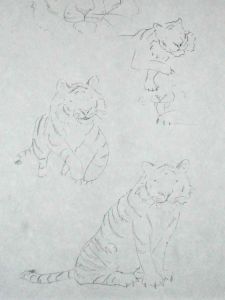 Step three:  Draw out and ink up tigers on that plain ol’ box net. 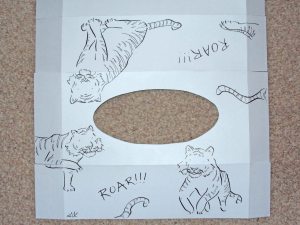 Step four:  The fun bit!  Colour that bad-ass in! 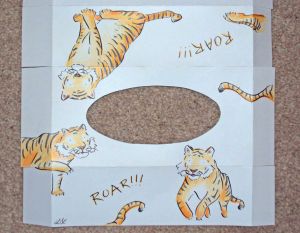 Step five:  Stick illustrated tissue box net to actual tissue box.  Beware that they’re tricksters and sometimes have the oval on both sides, only one of which is perforated. 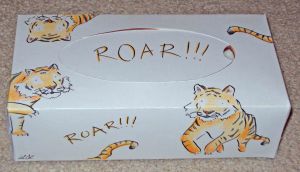 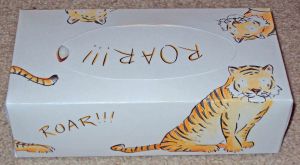