Have you been awesome today?  If so, this robot is dedicated to you.  If you’ve not been awesome, feel free to look at this page on a day when you are.

I am here on an extra day in Budapest but I still don’t have enough time to do everything I wanted.  An excuse to go travelling again perhaps?  So on my first day I took a free walking tour to get an idea of the place; we saw a concert hall with rubbish acoustics (so more recently used for rock music and raves rather than orchestral stuff), gödör (a club whose name translates into ‘pit’) which is built under a lovely little park and you can see into through a pond, we saw a lot of silly statues – silly because the people of Budapest wanted something nice and frivolous after all those overbearing political communist statues.  Went up Buda hills to reach the castle district, saw Mattias church and the fisherman’s bastion and there were beautiful views over the city.  I am hoping when I come back in a couple days (en route to Romania, the connections from Pécs are rubbish) I will have a go at climbing gellért hill and have a closer look at the citadel statue.

It somewhat surprised me to discover I actually know someone living in Budapest, so it has been nice to meet up with a friend along the way.  We went for a drink in a ruin bar – an old disused building that has been taken over by the bar, it had a lovely little courtyard with mis-matched tables and chairs, including the font of a mini with the engine taken out and made into a chair.

Last night the owners of the hostel cooked a massive traditional paprika krumpli dish for all the current residents.  It was so filling and delicious, lots of potatoes and paprika broth (as you had probably guessed) and chorizo and some other sausages.  It was a really nice community feel.

Later my friend and I went to a folk dancing night, there were live bands playing traditional Hungarian music and it looked like everyone was having so much fun.  They also looked like they knew what they were doing so my friend and I thought we would stick to just watching the action.

Yesterday I had a little excursion to Szentendre, a town (although the map called it a city, like, yeah right) which is covered with little art galleries and craft shops.  It lies along a river and is very quaint.  I think it would have been prettier had I not had the misfortune to visit whilst they were doing loads of roadworks everywhere…

Today I am going to try and get to parliament in time for the free tour and after, have a behind the scenes tour of Budapest, which sounded a bit similar to the kind of crazy guides tour we had in Krakow.

I am going to a cabaret night where the audience is encouraged to dress up according to a theme.  The theme we have been given is the circus.  Now, I have a somewhat extensive fancy dress wardrobe and I like to be able to wear costumes more than once – so I am updating a bear costume that I already have into a Wonderous Dancing Bear of Rave.  For some inspiration I drew some dancing bears to give me an idea of what I’d like my costume to include.  I plan to blog some how-to ‘s if ever you find yourself with a need to dress as a dancing bear…

A few practice drawings to get the feel of drawing bears 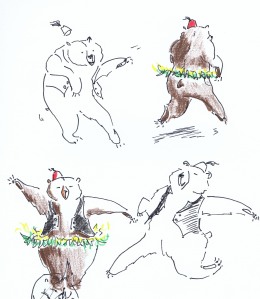 Some ideas for costume accessories etc

How To ‘s for each of these to follow!  I’m looking forward to putting it all together, I can bear-ly wait!